Birth of CINEMANIA /// For five consecutive days at the Montreal Museum of Fine Arts, Montrealer Maidy Teitelbaum organizes the first edition of a festival of French-speaking films with English subtitles. CINEMANIA is born !

Growing up /// The fourth edition of the festival turns into an 11-day event, which allows CINEMANIA to present even more films. French cinema star Isabelle Huppert presents THE SCHOOL OF FLESH by famous director Benoît Jacquot. Montreal media now includes CINEMANIA in the cultural landscape, and the first Audience Prize is awarded thanks to the support of Mel Hoppenheim.

Creating a strong network /// Having reached a higher level of maturity, CINEMANIA succeeds in obtaining the support of prestigious sponsors such as Sofitel Montreal Golden Mile and Air Canada.

Moving /// An important step is taken! After ten years, which have allowed the festival to become well established, CINEMANIA must move to accommodate its growing number of loyal festival-goers. The large Imperial Cinema, a historic hall, becomes the ideal place to improve the spectator experience.

Celebrating 20 years /// In its 20th anniversary year, CINEMANIA launches several new projects. The festival strengthens its unique and ongoing relationship between French-speaking filmmakers and Quebec distributors, makes the diversity of French-language cinema accessible to young people through a programme of school screenings and expands its free summer programming of films in a few Montreal parks. For its 20th anniversary, CINEMANIA rolls out the red carpet for many stars including Lambert Wilson, Anne Fontaine and Laurent Lafitte.

Embracing “La Francophonie” /// CINEMANIA, now 22 years old, continues its dynamic growth. In collaboration with the SODEC, the festival organizes and hosts the “Rencontres de co-productions francophones‘’ (RCF). This major event brings together more than 200 delegates from the French-speaking film industry within the framework of CINEMANIA, which aims to strengthen and promote international cooperation in the field of French-speaking cinema, as well as the global influence of French-speaking culture in all of its diversity. That same year, CINEMANIA greets fifteen renowned guests, including Nicole Garcia, Virginie Efira, SOKO and Raphaël Personnaz and also shows all of the 2016 Cannes Festival Official Selection: Nicole Garcia’s LAND OF THE MOON, Paul Verhoeven’s ELLE,  Bruno Dumont’s SLACK BAY, Jean-Pierre and Luc Dardenne’s THE UNKNOWN GIRL, as well as  Alain Guiraudie’s STAYING VERTICAL.

A record /// CINEMANIA 2018 Film Festival offers a record 50 feature films premiering, with 67 screenings spread across five theatres. Some twenty stars are invited to present their respective films during this 24th edition.

25 years ! /// CINEMANIA celebrates its 25th anniversary with brio, recording the highest number of participants in its history with 28 000 spectators and once again reaffirms its commitment to the Francophonie. The French feature films such as Céline Sciamma’s PORTRAIT OF A LADY ON FIRE and Québec’s Sophie Deraspe’s ANTIGONE represent their respective countries in the race for the 2020 Oscars, further enhancing the selection.

Becoming even stronger /// In light of the COVID-19 pandemic, CINEMANIA initiates a major digital shift by developing an online streaming platform for most of its programming. For the first time, viewers from ocean to ocean in Canada will be able to watch films from CINEMANIA’s selection from the comfort of their living room. The festival will run for three weeks combining virtual and in-person screenings across its regular venues while respecting social distancing and the health measures in effect.

Lastly, the festival has created a new visual identity for itself calling upon the magic of cinema and the necessity of dialogue between francophone cultural communities. 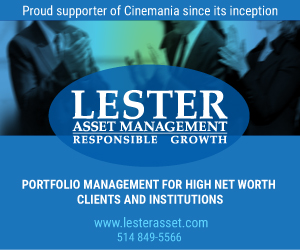