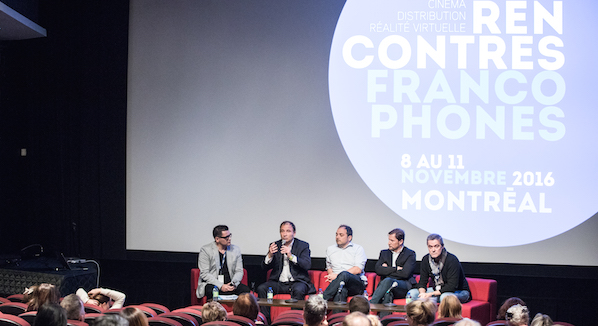 Montreal, Monday, September 25, 2017 --- CINEMANIA Film Festival is pleased to announce its collaboration with La Societe de Developpement des Entreprises Culturelles (SODEC) in organizing the next edition of the Rencontres de Co-production Francophone (RCF) from November 6-10th in Montreal for the second year in a row.

CINEMANIA’s programming and the various professional activities initiated by SODEC with the RCF proved so successful and such an excellent fit last year in Montreal, that the event warranted repetition again this year. CINEMANIA is an equal partner with SODEC in this unique project. Once again, the films programmed at the Festival, November 2-12, will resonate with the workshops and meetings planned at the Rencontres de Co-production Francophone: feature films on the Imperial Cinema’s big screen, the Cinematheque Quebecoise and Cinema du Parc, all under the auspices of CINEMANIA, reflect the collaboration between film producers in France, Quebec, Luxembourg, Belgium, Switzerland, Tunisia, etc.

The Rencontres de Co-production Francophone reunites film industry professionals (producers, financial partners, sales agencies and distributors) from Quebec, Canada, Europe and Francophone Africa, with the common goal of discussing financial and co-production issues in the creation of French language films. The RCF is the perfect venue that allows all the players involved to meet potential partners. Projects are pitched on video in individual meetings in a dedicated environment that stimulates networking. CINEMANIA collaborates in welcoming both international and Quebec-based guests as well as coordinating all the activities of the RCF event.

Nearly all the activities of the Rencontres de Co-production Francophone will take place at Hotel Sofitel Carre d’Or, with the participation of Air Canada, principal sponsors of CINEMANIA.

CINEMANIA celebrates its 23rd edition at the Imperial Cinema, November 2nd to 12th. The complete Festival program will be unveiled on Tuesday, October 24th, 2017.
Retour