A GLANCE AT THE “REGARD” FESTIVAL 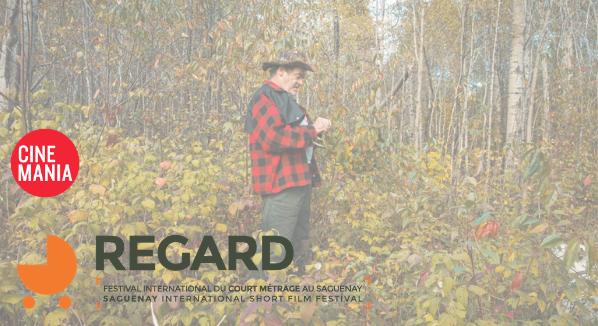 Thursday, March 12, 2020, after only one day of activities, the 24th edition of the Saguenay International Short Film Festival is suddenly interrupted because of risks associated with the coronavirus. The most important Canadian festival dedicated to short films was on the verge of presenting no less than 198 films emanating from 56 countries. Close to 600 guests were expected to attend the event in the Saguenay…

Stopping the screenings proved to be brutal but the Festival team quickly reinvented itself. Guillaume Lambert, the spokesperson for this aborted edition, used the opportunity to shoot a short feature film about the city’s morose atmosphere following the announcement, thus reviving the concept of an improvised film. Despite having to deliberate at a distance, the five juries managed, after all, to distribute 15 awards which allowed these shorts to survive beyond the festival. During the quarantine, the winning films were broadcast on Télé-Québec’s La Fabrique Culturelle.

To keep its 2020 programming alive and ensure that it remains in the annals, the REGARD team spent the whole summer crisscrossing the province with open-air screenings as well as organizing a drive-in entitled L’After en plein air, combining short films, concerts and a giant karaoke!


“REGARD” lands at CINEMANIA!

For its part, CINEMANIA made sure to recognize the remarkable resilience and work done by REGARD in connection with the obstacles it faced in 2020. It also afforded an opportunity to salute the exceptional contribution and expertise of this major festival on both the national and international scenes.

Thus, the Managing Director Marie-Élaine Riou and the Programming Director Mélissa Bouchard enabled CINEMANIA to make its official entry into the world of shorts: for the first time in its history, the Montreal festival is inaugurating a competitive component comprising 26 international short-films to mark its 26th edition.

Nine of the Québécois films that are in the running in CINEMANIA’s new competition were part of REGARD’s programming this year. As most of them were unable to be shown in the Saguenay following the Festival’s cancellation, we continue to have them travel. Furthermore, all the films will be eligible for the new AQCC-Nespresso Jury Award for the Best short film (1500$ purse awarded to the best director).

Martin Villeneuve’s IMELDA 3 : SIMONE completes this selection of Québécois short-films, available at a cost of $4 for the program or $1 per film.


Eight emblematic shorts presented at REGARD since 2014

In addition, this year, CINEMANIA will rebroadcast several emblematic short films discovered or shown at the REGARD festival since 2014. These shorts have been selected for their originality, popularity or recognitions garnered in the Saguenay or elsewhere, a way to return to the highlights of REGARD and the works of female and male creators who make up the pride of the new generation of cinematographers in Quebec.

All the films are offered free of charge from the 4th to the 22nd of November here.