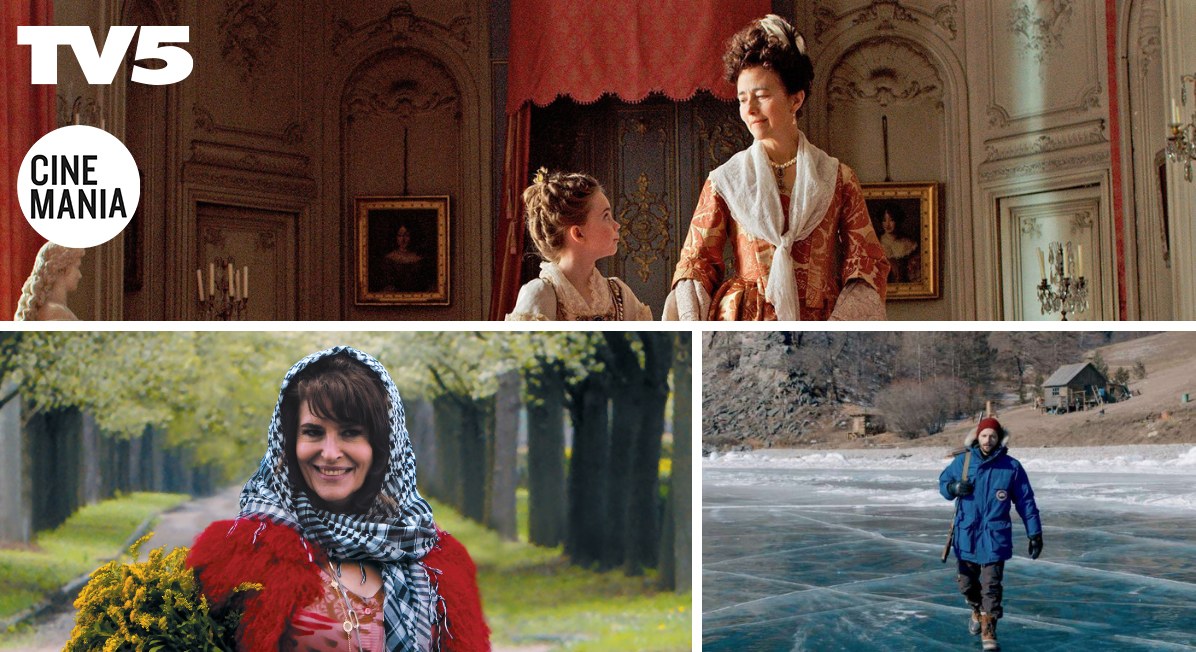 We are proud to present in collaboration with our partner TV5 a selection of feature films from the programming of previous editions of CINEMANIA. From December 7, 2020 to January 3, 2021, rediscover 14 films presented at the festival between 2015 and 2018 online on TV5. For four weeks, this special collection offered free of charge will take you on a journey through time and around the world. On the menu, great names of French-language cinema (Cécile de France, Suzanne Clément, Olivier Gourmet, Virginie Efira, Bérénice Bejo, Gilles Lellouche), moving stories, colorful characters and much more! In short, something to delight your eyes during the holiday season.

​To be seen for free online on TV5:

In 1721, Philippe d’Orléans (Olivier Gourmet), Regent of France, develops a brilliant but unorthodox idea – to propose to Spain’s Philippe V, (Lambert Wilson) a marriage between the 11-year old Louis XV and 4-year old child princess, Anna Maria Victoria. The Spanish bride would not even be able to conceive for another decade! D’Orléans also proposes that his own daughter, Mlle de Montpensier, marry the young Prince des Asturies, future heir to the Spanish throne. All this to reduce tensions after years of war between the two neighbouring countries. Madrid’s response is enthusiastic and “an exchange of princesses” ensues in 1722 amid a lavish ceremony. But things don’t unfold according to plan...

What a story, and what an extraordinary actress to have been cast by director Nadir Mokneche to play the hero/heroine! Fanny Ardant as Lola, is simply brilliant, in this beautiful and touching dramatic comedy!

Soon after the burial of his immigrant Algerian mother in Paris, Zino (Tewfick Jallab) goes on a search for his father Farid. He discovers that his father never really returned to Algeria as he had always been told. Zino is appalled to uncover that Farid (Fanny Ardant), had actually undergone a sex-change 25 years before and had become “Lola”.


⇢ NUMBER ONE by Tonie Marshall 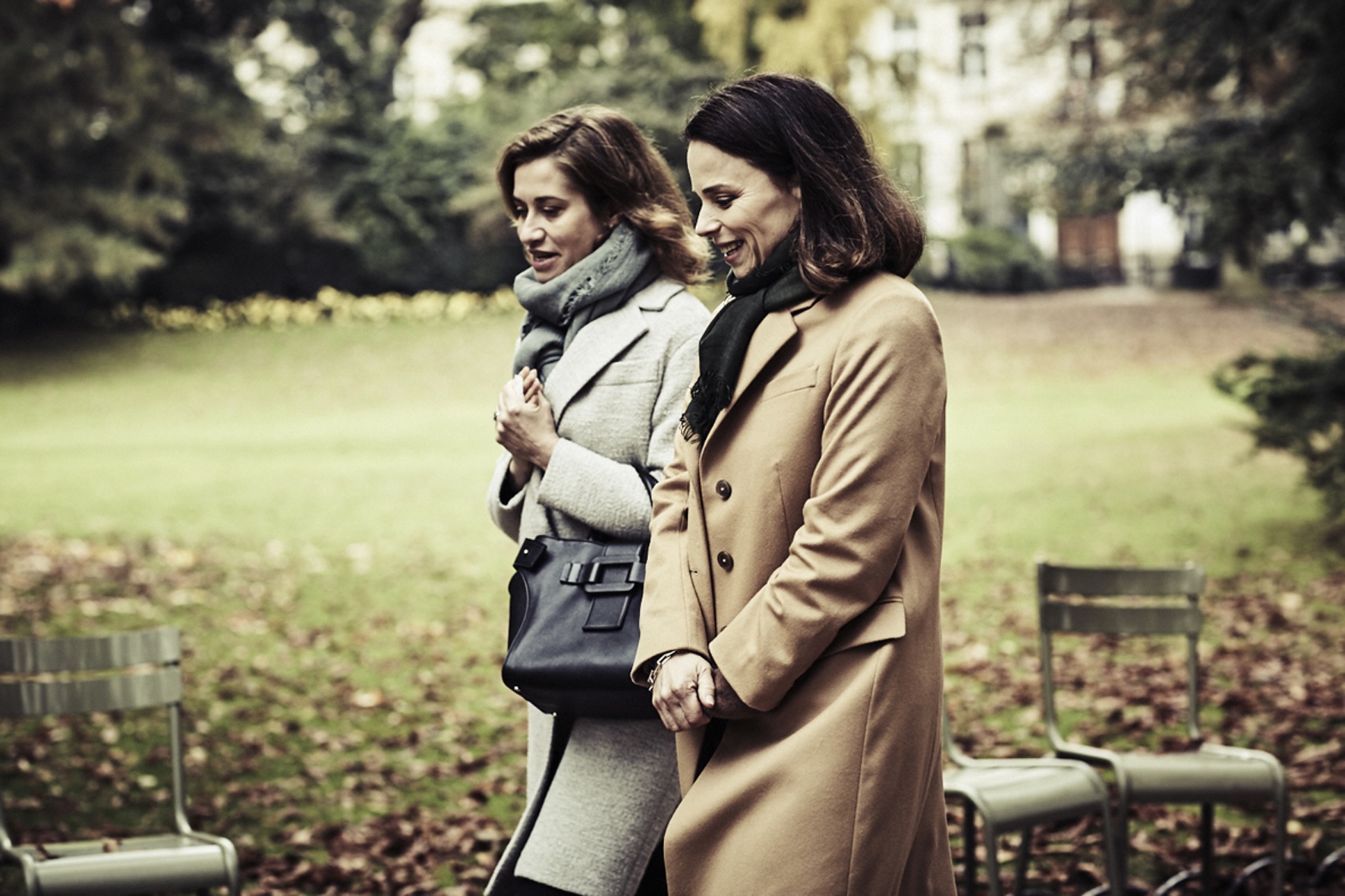 Emmanuelle Blanchey (Emmanuelle Devos), a brilliant and determined engineer, has successfully climbed the corporate ladder – she’s even attained a position on the Executive Committee. A group of influential women convince Emmanuelle they can help her achieve the impossible – become the CEO of a CAC 40 company (top 40 in France). She would be the first woman to reach that lofty position, heretofore dominated by men. There are however, obstacles in Emmanuelle’s path that begin to multiply, both professionally and personally. The ultimate prize is exciting, but is it worth the struggle?


⇢ THE CHILDREN OF CHANCE by Malik Chibane

July 1942. Thirteen-year old Maurice Grosman’s broken leg has landed him in hospital in the western Paris suburb of Garches, a stroke of luck by which he escapes the fate of thousands of Jews deported to Auschwitz after the infamous Vél’ d’Hiv roundup. To provide sanctuary, Doctor Daniel hands down a diagnosis of tuberculosis of the bone requiring lengthy treatment, a diagnosis that saves Maurice from almost certain deportation. He and 8 other courageous young patients form deep friendships and unbreakable bonds, and, with the help of hospital staff, live through unforgettable times in the ward.

Director Malik Chibane’s tender and moving dramatic comedy was inspired by the true story of “the lucky kids”.


⇢ THE STOPOVER by Delphine Coulin and Muriel Coulin 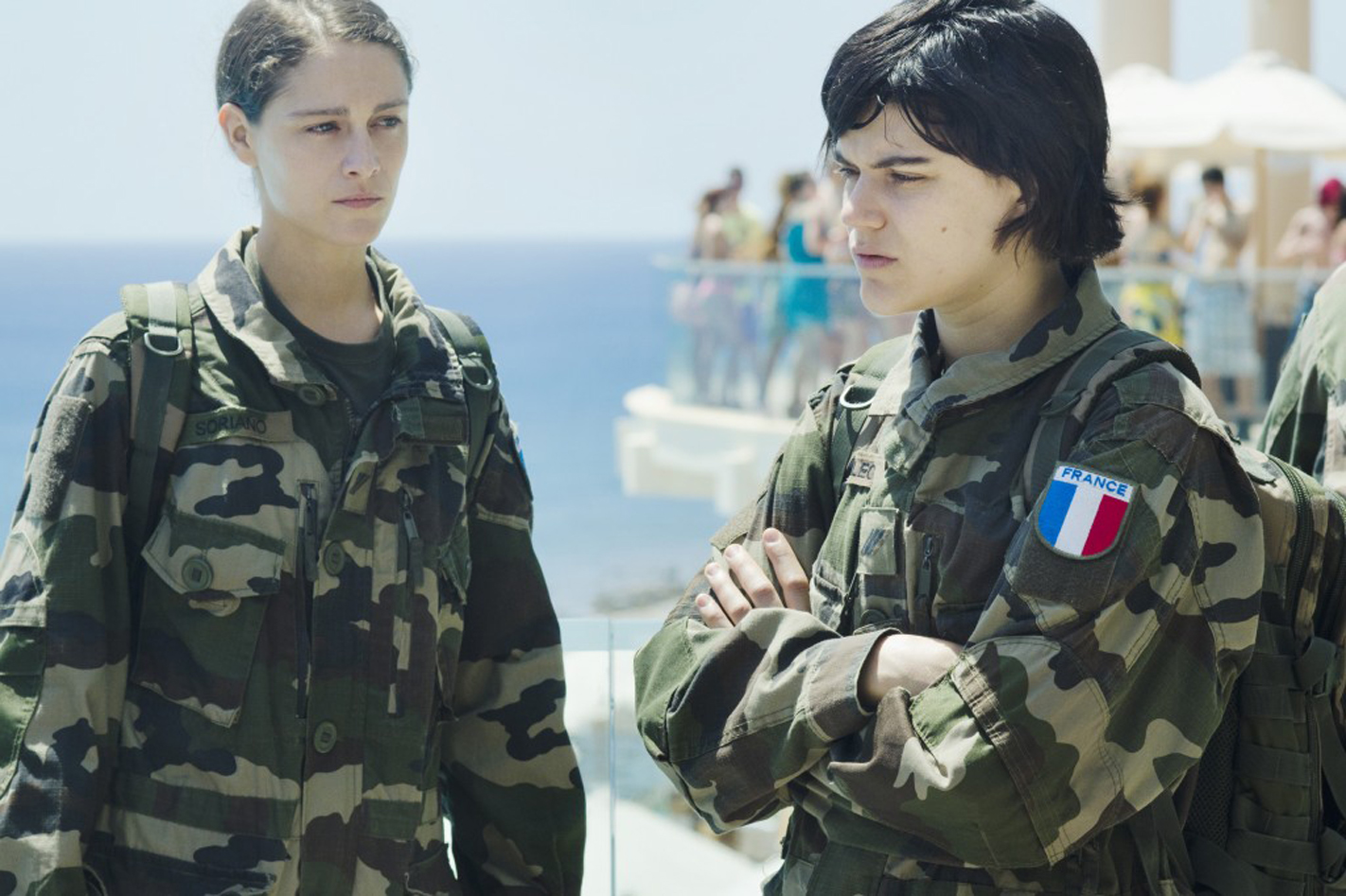 Soko (also starring in THE DANCER), plays one of a handful of female soldiers flying home to France with her platoon after a tour of duty in Afghanistan. But first, they are offered a layover in Cyprus for a weekend of decompression and group therapy in an absurdly hedonistic 5-star resort. There’s tension and traumatic memories seething below the surface — not to mention the added pressure of some male combatants’ sexism and misogyny.

Directors Delphine and Muriel Colin (17 FILLES), with this captivating and highly-original film, shed new light on post-traumatic stress syndrome and sexual exploitation of women in the military.

Victoria’s life is a whirlwind of activity. An accomplished criminal lawyer and a single mom, she’s sexually voracious but frustrated, fed up with the Web sites she uses to order men up to her apartment as if she would pizza. (They’re all losers). She’s restless, unmanageable, drinks like a fish, has a vindictive ex-husband and her flat is always in total shambles.  She reluctantly  gets involved with a younger man. All this ditzy action by the kooky and captivating Victoria culminates in a courtroom trial like no other, with a Dalmatian and a chimpanzee as star witnesses.

A vast prairie, a country and western gathering somewhere in eastern France. Alain is one of the mainstays of this community. He dances with Kelly, his sixteen-year-old daughter, while his wife and their young son, Kid, watch them tenderly. Later that day, Kelly disappears and their family life is shattered. Alain then starts constantly looking for his daughter, to the detriment of the rest of his family and all that he once possessed. He finds himself caught up in the maelstrom of the world. A world in the throes of upheaval, where Kid is his only support. His son sacrifices his youth as he is dragged around by his father in his endless quest.


⇢ AFTER LOVE by Joachim Lafosse 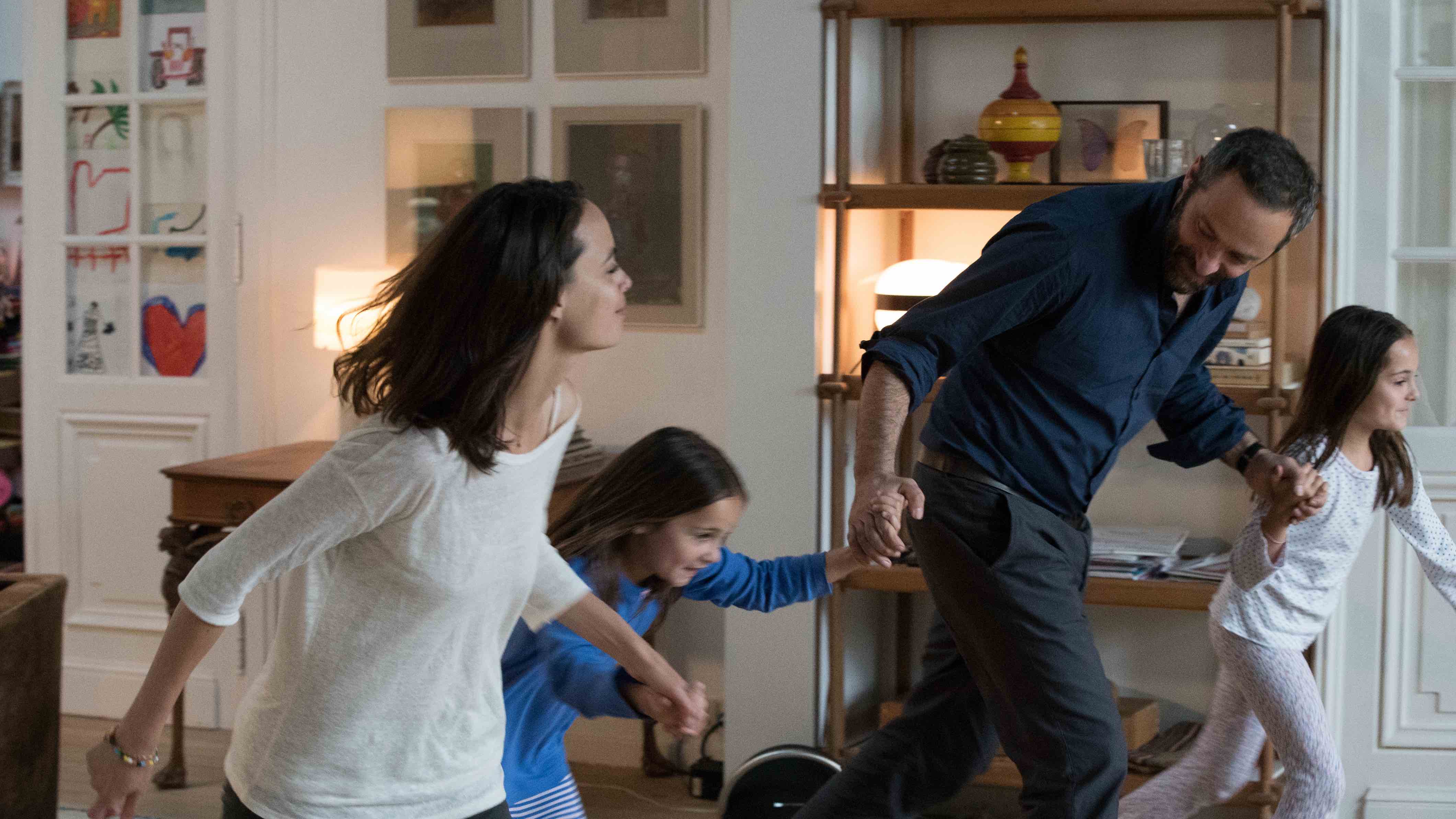 Bérénice Bejo (Marie) and Cédric Kahn (Boris) give outstanding performances in this story of a marriage coming apart at the seams.
After 15 years as a couple, Marie is tired of making mortgage payments on their beautiful apartment, while Boris remains forever unemployed. Marie owns the apartment, but Boris renovated it with his own hands. He can’t afford his own place unless Marie buys out his “rightful” share. As that’s impossible, they are at an impass, condemned to live together in a tiresome relationship, constantly bickering and shouting at each other. But while Marie is openly hostile toward Boris, he still holds a flame for her.


⇢ THE SENSE OF WONDER by Eric Besnard

In the heart of the Drôme in Provence, Louise raises her two children alone while trying to maintain and run the family farm. One evening, she narrowly misses running over a stranger. The man quickly reveals himself to be very different from most other people. And his ability to be amazed may indeed change life for Louise and her family.

1943. Nazi-occupied France. Jewish parents have entrusted their children to the care of remote boarding schools. Madame Forman (Cécile De France) is the headmistress of one such school that unfortunately doesn’t remain a safe haven for long. Hard-headed 12-year-old Fanny assumes the leadership of a small band of eight children, and resourcefully prepares to flee with them across France to the safety of Switzerland. It’s a frightening journey for these eight kids, as collaborationist French police and Gestapo agents lie in wait.
Director Lola Doillon has our hearts pounding in overtime, from beginning to end. Based on the autobiography of 86-year-old Fanny Ben-Ami, who now lives in Israel.

Two guys in an old motor-launch, step-brothers Homer and Joe who hardly know each other, putt-putt up a gorgeous river landscape in the wilds of Croatia. Their goal is to find out what happened to their father. What was the real cause of his recent and sudden death? They reach impassable waterfalls and are forced to venture into the interior with backpacks, and finally encounter a wandering and enigmatic Irishman who may know more about their dead father than he admits.

Teddy (brilliantly played by Raphaël Personnaz), feels liberated in his lonely hut on the shores of frozen Lake Baikal in Russia, a five-day trek from the nearest village. The lake is the deepest in the world. There are no roads. No food or drink other than vodka and the fish he catches in the lake. One night, lost in a blizzard, Teddy is saved by Aleksei, a man on the run who has been hiding out in the surrounding Siberian forests. A bonding, a friendship of sorts, develops between the two disparate men.

Poetic and joyous, it’s an adventure story like no other, based on Sylvain Tesson’s Médicis Prize autobiography novel.

Jerome, a businessman based in Shanghai, decides spontaneously to pay a visit to his family in Paris. He learns that his family’s country estate where he grew up is at the heart of a serious conflict. Jerome quickly decides to travel down to the estate and try to resolve matters. And it’s there that Jerome encounters Louise, his father’s beautiful stepdaughter... 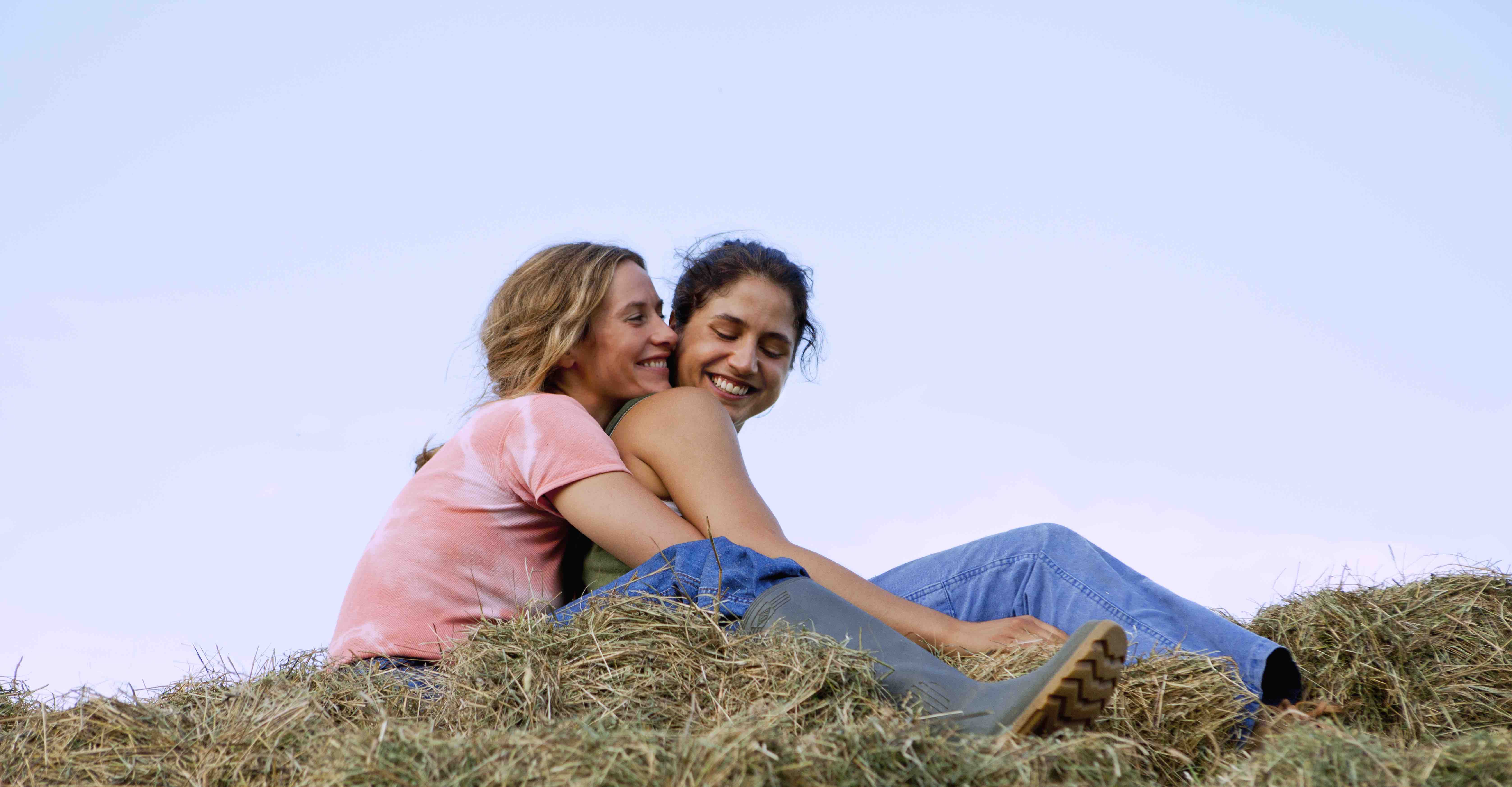 1971, Delphine is twenty-three years old. A farmer's daughter, she comes to Paris so as to be financially independent; she dreams of running her own farm, something unthinkable for a woman to do at this time. Carole is a Parisian. She's thirty-five years old and lives with Manuel. She's actively involved with the beginning of the feminist movement. When Delphine and Carole meet, their love affair turns their lives upside down.  But Delphine is obliged to return to the family farm. Carole follows her. Once there, they'll have to cope with another reality.