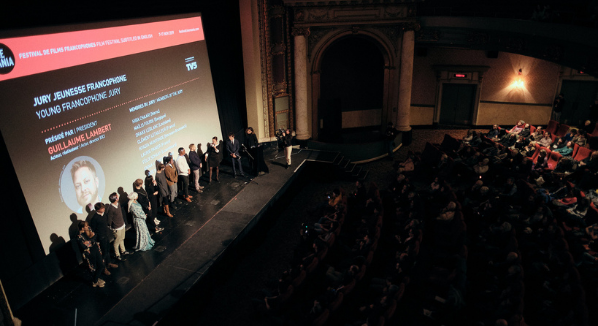 For the competition, the Programming Committee selected feature films that offer reflections on the Francophone world, its political and social issues and the contemporary history of the countries portrayed.

All the titles will be competing for the "Visages de la Francophonie TV5" Award (a $2500 prize for the winning director for the development of their next project). The films selected will be judged by members of the Francophone Youth Jury.

⇢ A GOOD MAN by Marie-Castille Mention-Schaar (France)
A pressing social issue: does a trans person in France have the right to become a parent before the law on medically assisted procreation has been passed?

⇢ WORKING GIRLS (FILLES DE JOIE) by Frédéric Fonteyne and Anne Paulicevich (Belgium)
Every day, French women in border areas go to work in Belgium—and some of them are sex workers.

⇢ CALL ME HUMAN  by Kim O’Bomsawin (Quebec)
A portrait of Innu poet Joséphine Bacon (73 years old), and through her story a look at the difficult history of Indigenous populations in Québec.

⇢ JOSEP by Aurel (France)
A look back at 1939, when Spanish refugees fleeing the Franco’s regime were imprisoned in concentration camps in the south of France.

⇢ NIGHT OF THE KINGS (LA NUIT DES ROIS) by Philippe Lacôte (Côte d’Ivoire, Quebec, Senegal, France)
An unprecedented journey into the West African prison system reveals much about Ivorian youth and their social and political aspirations. An homage to the oral tradition and living arts of Côte d’Ivoire.

⇢ MICA by Ismaël Ferroukhi (Morocco)
The social inequalities of Morocco from the perspective of a child, and his dream of escaping to Europe.

⇢ OUR LADY OF THE NILE (NOTRE-DAME-DU-NIL) by Atiq Rahimi (France, Belgium, Rwanda)
The genesis and mechanisms of the Rwandan genocide.

⇢ THE BREITNER COMMANDO (QU’UN SANG IMPUR) by Abdel Raouf Dafri (France)
A new perspective on the Algerian War of Independence and the abuses committed by a French military commando.

⇢ SHOULD THE WIND DROP by Nora Martirosyan (France, Belgium, Armenia)
Set amidst the very tense political situation in a separatist region of the Caucasus.

⇢ VACARME by Neegan Trudel (Quebec)
The tumultuous journey of adolescent girls who are placed in Quebec group homes by the Director of Youth Protection.

The Young Francophone Jury is a project initiated by the Consulat général de France à Québec.